I quote from an email that might be of interest to fans of Darwin and choral music—especially if they live in the London area:

A unique and intriguing blend of ancient and modern - UK premiere 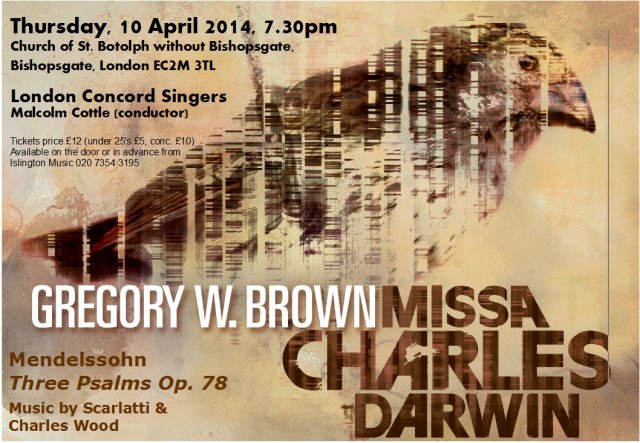 With its texts taken from the writings of Charles Darwin, its music based on the traditional polyphonic mass yet with the core germ of its musical structure coming from the genetic sequence of Platyspiza crassirostris (commonly known as Darwin's Finches), Missa Charles Darwin by Gregory W Brown (brother of the novelist Dan Brown) is very much a work for the modern day, forming a unique and intriguing blend of contemporary music with modern science and traditional musical forms.The mass was premiered in 2011 by the all male group New York Polyphony, and London Concord Singers are pleased to be presenting the UK premiere of the work, as well as giving the world premiere version for mixed choir. Missa Charles Darwin will be performed alongside Mendelssohn's Three Psalms, Op. 78 and motets by Alessandro Scarlatti and Charles Wood.