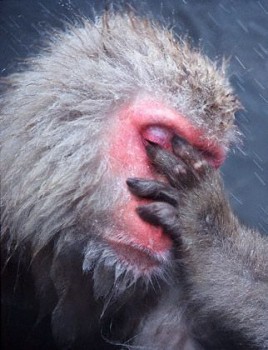 By far and away the most popular page on the Friends of Charles Darwin website for attracting inane creationist comments is the frequently asked question page, If humans evolved from monkeys, how come there are still monkeys?

I never approve these comments, as it's my policy not to give creationists publicity on this website. They can go and spout their bullshit on their own websites, as far as I'm concerned. But the latest creationist comment amused me so much that I thought I would give it a blog post all of its own.

JUST SHOW MWE A MONKEY NEW OR OLD THAT CAN STILL EVOLVE (CHANGE) INTO A HUMAN. TODAY THAT STILL CANT EVEN BE GENETICALLY DONE. SO ITS A BUNCH OF BULLSHIT, JUST ANOTHER REASON NOT TO BELIEVE IN GOD. STOP LETTING THESE PPL FLOOD UR MIND WITH THSESE LUDICROUS ACCUSATIONS. NOT ONE OF THESE MONKEYS CAN HELP ME WITH ANYTHING TODAY, NOT ONE. DO ANY OF U PRAY 2 MONKEYS, LIKE AS UR GOD? ALOT OF MONKEYS DONT EVEN EAT MEAT, IF THEY DO ITS LIKE MONTHS WITHOUT IT. PPL THAT DONT EAT MEAT IS ONLY BECAUSE THE THOUGHT OF IT. KILLING AN ANIMAL GROSS OR ETC. I SHOULD HAVE SOME OF THE SAME GENES AS MONKEYS WE ALL SHOULD. I CANT CLIMB A FUCCIN TREE AND SWING ON BRANCHES AND SHIT, NOT TOO MANY PPL CAN. I MEAN THERE MUST HAVE BEEN DIFFERENT RACES OF MONKEYS. LIKE THE MEXICAN MONKEY, CAUCASIAN. BLACK, ETC. FUCCIN MONKEYS SPEAKING SPANISH AND SHIT, MAN PLEASE. SHOW ME ONE MONKEY BESIDES CEASAR THAT CAN SPEAK, AND HE WAS IN A FUCCIN MOVIE. OR THE MOVIE BEFORE THAT WHRE BU HAD ALL THESE MONKEYS TALKING AND SHIT. PLEEEEAAAASE STOP FEEDING IN TO THAT BULLSHIT.

So, there you have it. I'm not entirely sure whether the person who submitted the comment was trying to be serious, or whether they were just having a laugh, but they certainly made me chuckle. Thanks.

(Before you say anything, I am fully aware that the phrase ‘inane creationist comments’ is tautological.)