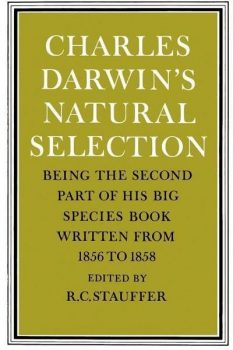 On 14 May 1856, Charles Darwin recorded in his journal that, on the advice of his friend Charles Lyell, after almost 20 years exploring the subject, he had finally begun writing a ‘sketch’ of his ideas on species.

Lyell was anxious for Darwin to get something down on paper quickly to establish his scientific priority. He was worried his friend might be scooped. But Darwin, being Darwin, soon introduced some humongous scope-creep into his project. He stopped referring to the manuscript as a ‘sketch’, and began thinking of it has his ‘big species book’. He worked diligently on the book for the next couple of years, until events overtook him.

On 18th June 1858, Darwin received a bombshell in the form of a letter from Alfred Russel Wallace, who had independently come up with the theory of Natural Selection while collecting specimens in the Malayan Archipelago (modern day Indonesia). A distraught Darwin immediately wrote to Lyell saying, ‘Your words have come true with a vengeance that I shd be forestalled.’ It looked as if Darwin was, indeed, about to be scooped!

Lyell and Joseph Dalton Hooker quickly arranged for a joint paper, comprising an extract of Wallace’s letter and some earlier papers Darwin had previously shared with them, to be read at a meeting of the Linnean Society of London on 1st July 1858. This officially secured joint priority for Darwin and Wallace, although Lyell and Hooker’s own priority was surely to ensure their friend was not unfairly forestalled in the eyes of the scientific establishment.

The scare finally provoked Darwin into pulling his socks up. He put aside his planned big species book, and immediately began writing a shorter version of it that was published the following year. This supposed ‘extract’ of his big species book was entitled: On the Origin of Species by Means of Natural Selection, or the Preservation of Favoured Races in the Struggle for Life. As extracts go, it’s an absolute classic.

Sadly, Darwin was never to finish writing his big species book. However, its first two chapters were later used as the basis of Darwin’s 1868 book Variation of Plants and Animals Under Domestication. Some of the rest of his draft was published posthumously in 1975 under the title Charles Darwin’s Natural Selection: Being the Second Part of his Big Species Book Written from 1856 to 1858.

Writer and photographer Richard Carter, FCD is the founder of the Friends of Charles Darwin. He lives in Hebden Bridge, West Yorkshire.Website • Facebook • Twitter • Newsletter • Books
Buy my book: On the Moor: Science, History and Nature on a Country Walk
“…wonderful. Science and history and geography and evolution and culture all tangled up in musings while walking about the moors around Hebden Bridge.”—PZ Myers
Amazon: UK | .COM | etc.