The case of the morbid book inscription

In December 2013, while visiting one of my favourite second-hand book shops with a friend, I came across a first edition of the essay collection New Fragments by one of Charles Darwin’s close friends, the physicist John Tyndall.

I was still working on my book On the Moor: Science, History and Nature on a Country Walk at the time. John Tyndall features prominently in two chapters, so I felt compelled to buy the book. (Well, that was my excuse, and I’m sticking to it.) Perhaps more intriguing than the book itself was the dramatic, hand-written inscription on the title page:

Transcript: Received at [the?] Temple Chambers on Friday 15th January 1892 (on a bed of sickness that has been well nigh unto death)

I concluded the inevitable blog post about my find with the confident prediction, ‘I guess I’ll never know the story behind these words—which is one of the appeals of such enigmatic inscriptions.’

But, hang on! Not so fast, Richard…

Four years and three days after coming across the enigmatic inscription, I happened to end up in a Twitter exchange with none other than the ghost of John Tyndall. (Twitter is weird like that.) I took the opportunity to draw his attention to my find:

I think I may know the story behind those words...will get back to you later tomorrow.

True to his word, the ghost of John Tyndall did indeed get back to me the next day, in the guise of his amanuensis and biographer, Roland Jackson, who wrote:

[T]here’s an outside chance that your book is inscribed by [the mathematician] Thomas [Archer] Hirst. 15 January was publication day and he might have risen from his sickbed to get a copy. He died on 16 February. Tyndall at the time was confined to Hindhead, and the writing isn’t his wife’s (who might have gone to get it but I think there’s no mention in the diary) or his I think.

I attach the only really contemporary letter of Hirst’s we have. His writing seems to have changed quite a bit as he got more and more ill. There are resemblances but I’m not sure strong enough to be definitive. See what you think, making allowances for a sick man scrawling it on his bed.

Here is the attached letter from Hirst:

I have just ordered your dozen of Whisky It ought to reach you tomorrow, or next day, I trust you will continue to like it, at your midday repast.

What do you think of Sir W. Thomson’s new Peerage? People here are wondering what title he will select to bear.

As to your possible change from Hind Head; Spencer has just been saying that he found perfect quiet at Bournemouth. This is worth knowing; for he is almost as sensitive as you are, with respect to quietude at night.

Every yours affectionately | Tom

A letter concerning whisky, containing gossip about the future Lord Kelvin, and with word from (presumably) Herbert Spencer: right up my street!

I’m no handwriting expert, but, as Roland Jackson suggested, I compared my book inscription with the Hirst letter and noticed a number of similarities, namely:

Two other factors to consider:

Do I think this conclusively proves my morbid book inscription was indeed written by Tyndall’s dear friend Thomas Archer Hirst? No I don’t. But do I strongly suspect it was? You betcha!

I couldn’t let the opportunity occasioned by writing about Thomas Archer Hirst and John Tyndall go by without relating a couple of personally interesting co-incidences about their friendship.

While I was researching Tyndall for my book, I learnt that he and Hirst first became friends as young men while surveying a proposed railway line between Halifax and Keighley, West Yorkshire. Those towns both lie just 20 minutes’ drive from my home. More pleasing, however, was it to discover that the man they both worked for was my namesake, the land agent and surveyor Richard Carter. 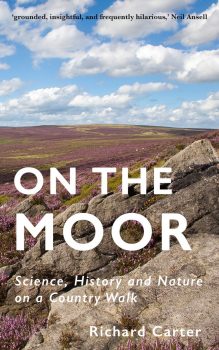 Writer and photographer Richard Carter, FCD is the founder of the Friends of Charles Darwin. He lives in Hebden Bridge, West Yorkshire.Website • Facebook • Twitter • Newsletter • Books
Buy my book: On the Moor: Science, History and Nature on a Country Walk
“…wonderful. Science and history and geography and evolution and culture all tangled up in musings while walking about the moors around Hebden Bridge.”—PZ Myers
Amazon: UK | .COM | etc.